Today I made a second attempt at synthesizing the dye Martius yellow (2,4-dinitronaphthol). Unlike the previous attempt, I used more gentle heating, by way of an improvised steam bath, and this led to the expected results.

The flask was then placed in the improvised steam bath (shown below) and heated for 15 minutes. 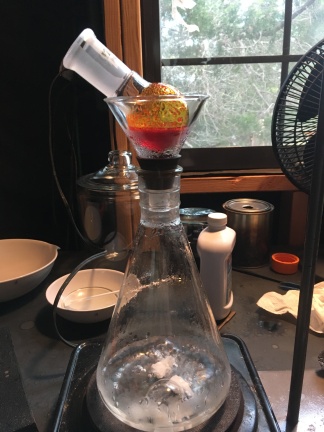 After 5 minutes of heating

After about 5 minutes, the naphthol was fully dissolved and the color of the solution darkened from cherry red to dark amber. The flask was swirled occasionally, but allowed to stay on the steam bath. The temperature of the contents never reached 100ºC, but rather stayed between 60º and 70º C the entire time.

After the 15 minute period was nearly complete, the contents of the flask quickly solidified into a pale yellow solid, presumably the disulfonic acid. 25 mL of distilled water was added, in which the solids quickly dissolved with moderate exotherm observed 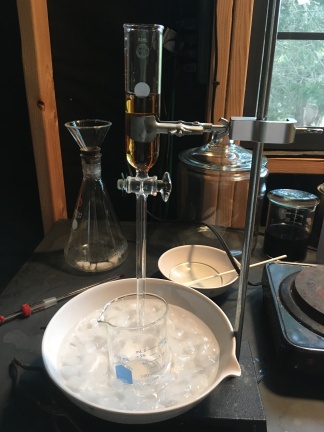 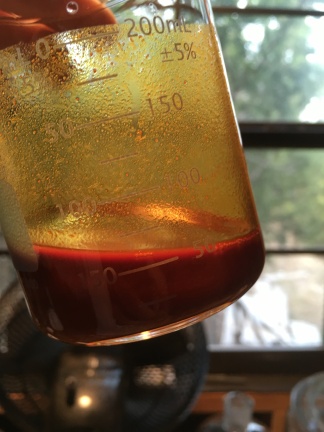 After being cooled to about 15ºC in an ice bath, the solution of the disulfonic acid was transferred to an addition funnel. Then it was slowly added to a 250 mL beaker containing 6 mL of azeotropic nitric acid, chilled in an ice bath. The color of the solution darkened immediately as it reacted with the nitric acid, and a yellow-orange precipitate began to form. 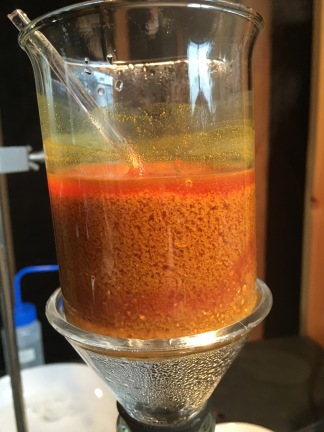 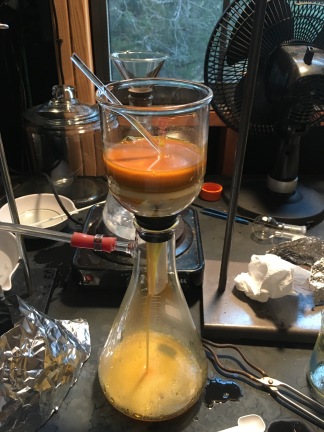 100 mL of distilled water (containing 2 mL of nitric acid, because I suspect mine is less than azeotropic)  was added to the beaker, and it was placed on the improvised steam bath. Once the contents of the beaker reached 60ºC, it was heated and stirred occasionally for 10 minutes. Much more yellow-orange precipitate (presumably Martius yellow) formed during this time. Then, the beaker was cooled to 15ºC in an ice bath and the contents were vacuum filtered. The filtrate was orange, probably from only a small amount of Martius yellow being dissolved in it as it has a very strong color.

The product was allowed to dry on the fritted funnel for a few minutes, but I had to cut off the pump because it has been acting strange and stalling out frequently. Because of this, I simply scraped it together, still damp, onto a watch glass, and placed it in my desiccator. The damp weight, although it means very little, was 14.77 grams. It is still very wet since a 100% yield of Martius yellow would be 8.12 grams. I will post an update with the correct weight and a picture of the dried product in a few days.

Although Martius yellow is not fluorescent, it is very bright yellow and minuscule amounts of it are enough to stain paper or skin bright yellow. Also, the nitro groups make Martius yellow much more acidic than 1-naphthol, so the ammonium salt of it (which is much more water soluble) can be made by dissolving it in concentrated aqueous ammonia, according to Fieser. It can then be salted out using ammonium chloride. This is something that I would like to try with a portion of my product. Another small portion will be saved, and the rest will go to making the other dyes in Fieser’s series.

One thought on “Synthesis of Martius Yellow – Success”