I’m home for the weekend and have lab access, so I decided to try the next reaction in Fieser’s series, the reduction of Martius yellow to 2,4-diaminonaphthol. I was not successful, but I’ve written up the procedure anyway. Fortunately I did it as a small scale test, so not much was lost and I still have most of my Martius yellow.

1.001 grams of Martius yellow (ammonium salt) and 6.433 grams of sodium dithionite were weighed out, as shown below.

The Martius yellow was dissolved in about 40 mL of hot water to give a dark orange solution. 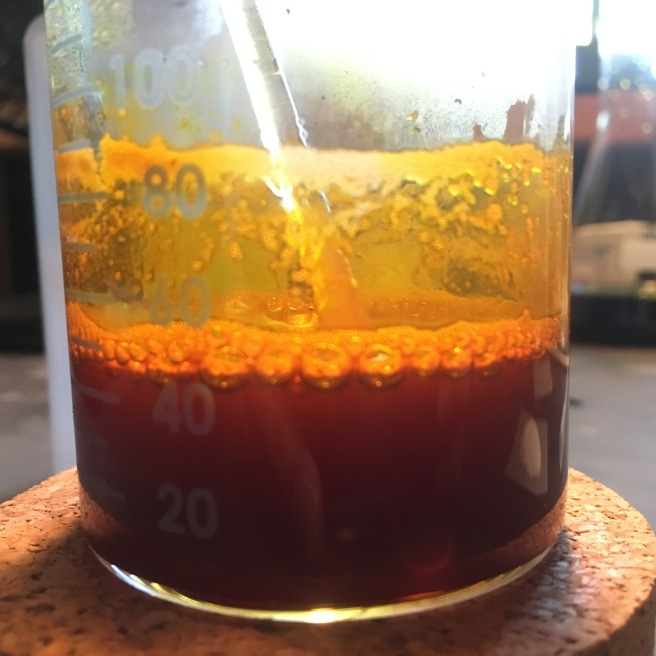 With vigorous stirring using a magnetic stir bar, the sodium dithionite was gradually added to the Martius yellow solution. A fine precipitate forms and the color lightens somewhat.

Stirring is continued for 10 minutes but the appearance of the solution does not change. By this point, it should appear as a tan precipitate in a colorless solution. About 2 additional grams of sodium dithionite is then added to make sure that an excess is present. Nothing changes.

The most likely reason for the reaction not proceeding as it should is that the sodium dithionite used was too old and no longer active. I had received it as a gift from a Sciencemadness member about a year ago, and I had not used it at all since then. It was very clumpy, so I think it is possible that it had gotten wet, which would have caused it to decompose to sodium bisulfite. Sodium bisulfite would not be effective in this reaction. It was for this reason that I decided to try this as a small trial run today. Unfortunately, this means I will need to buy new sodium dithionite and I am having trouble finding it at a reasonable price. As 2,4-diaminonaphthol is the precursor to the rest of the dyes in Fieser’s series, I will not be able to continue with this project until I do (it may be possible to reduce the nitro groups using aluminum and sodium metabisulfite, but I have tried that reaction before with a different compound, and it makes a huge mess. I don’t want to do it again).